Two weeks ago, I released a new version of SSL Kill Switch, my blackbox tool for disabling SSL pinning in iOS apps, in order to add support for iOS 12.

The network stack changed significantly between iOS 11 and 12, and it was no surprise that the iOS 11 version of SSL Kill Switch did not work on (jailbroken) iOS 12 devices. This post describes the changes I had to make for the tool to support iOS 12.

Implementing SSL pinning in a mobile application requires customizing the validation logic done by the app on the server’s certificate chain, when the app opens an SSL connection to this server. Customizing SSL validation is almost always done via some kind of callback mechanism, where the application code receives the server’s certificate chain during the connection’s initial TLS handshake, and then has to make a decision on the chain (whether it is “valid”, or not). For example, on iOS:

Hence, the high-level strategy for disabling SSL pinning in applications is to prevent the SSL validation callbacks from being triggered, so that the application code that is responsible for implementing pinning is never exercised.

On iOS, it is relatively easy to prevent the NSURLSessionDelegate validation method from being called (and it is how the early versions of SSL Kill Switch worked), but what about iOS apps that use a lower level API (such as Network.framework)? As each networking API on iOS is built on top of another, disabling the validation callbacks at the lowest level would potentially disable validation for all the higher level network APIs, which would allow the tool to work against a lot more apps.

The network stack on iOS in general has been going through a lot of changes since iOS 8, and on iOS 12, the SSL/TLS stack is built on a custom fork (I think?) of BoringSSL. This can be seen for example by setting a breakpoint on a random BoringSSL symbol when running an app that opens a connection: 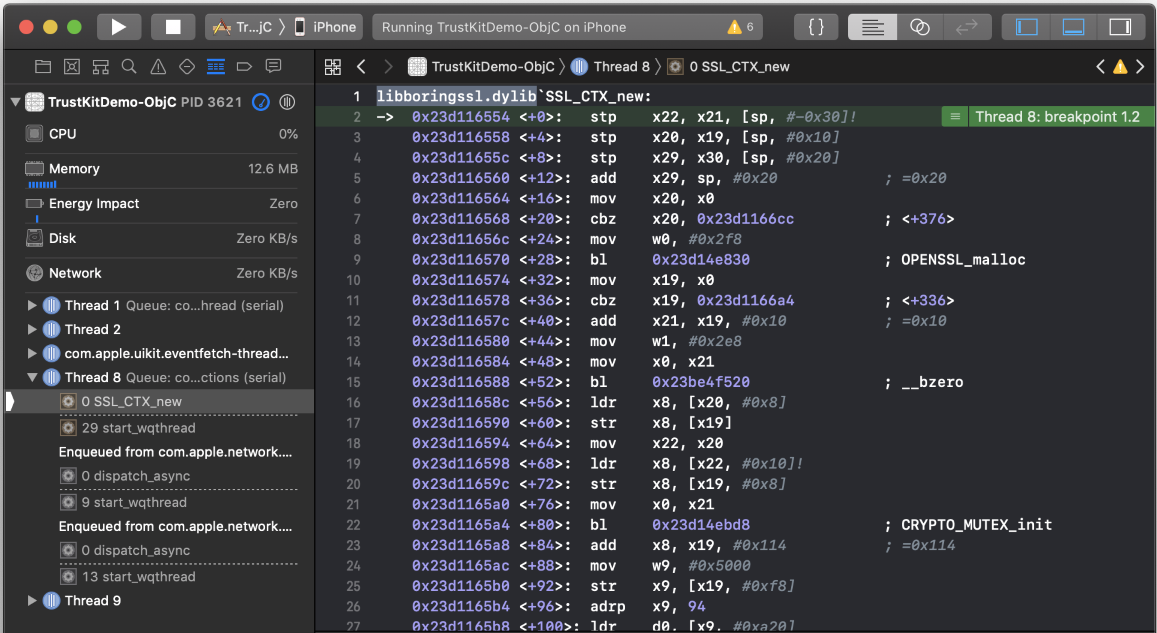 If you remember the strategy: “prevent the SSL validation callbacks from being triggered”, it is likely that by targeting and patching BoringSSL, the lowest level SSL/TLS API on iOS, all the higher level APIs on iOS (including NSURLSession) would also have pinning validation disabled.

When using BoringSSL, one way to customize SSL validation is to configure a validation callback function via the SSL_CTX_set_custom_verify() function:

Here is a simplified example of how it is meant to be used:

Using a test app with SSL pinning enabled for NSURLSession, I was able to confirm that SSL_CTX_set_custom_verify() does get called when opening a connection: 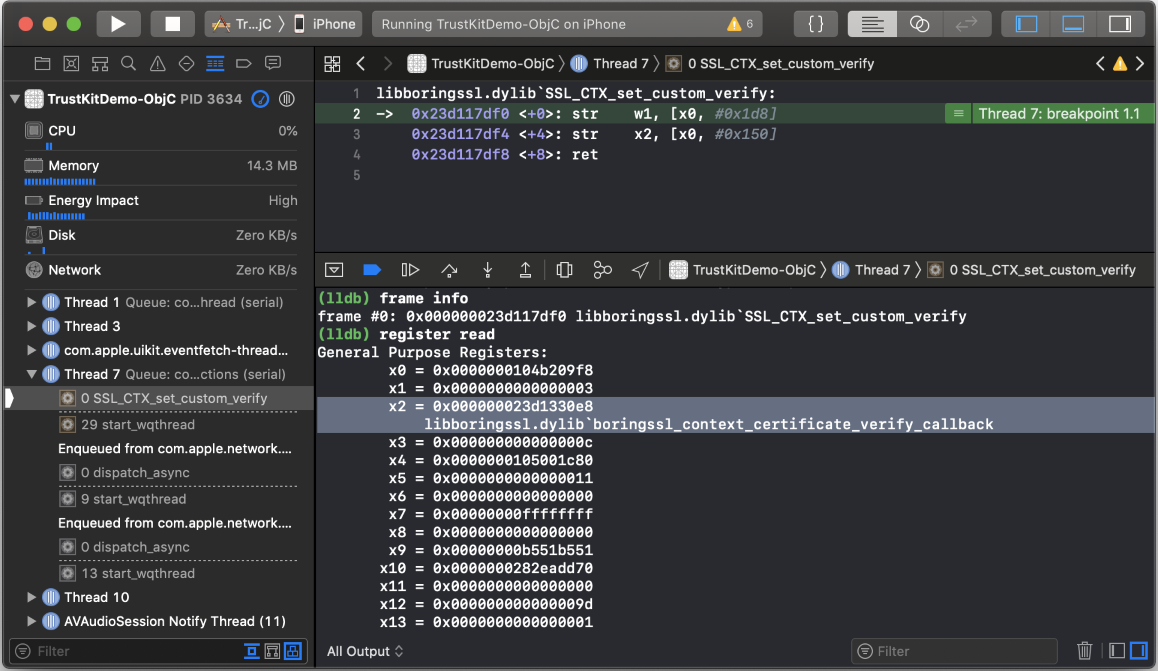 We can also see the Apple/default iOS validation callback function passed as the third argument (in register x2): boringssl_context_certificate_verify_callback(). It is likely that this callback contains (among other things) logic to set things up for my test app’s NSURLSession callback/delegate method to eventually be called with the server certificate.

And as expected, my test app’s delegate method for pinning validation code does get exercised:

And I have designed my test app to have its custom/pinning validation logic always fail: 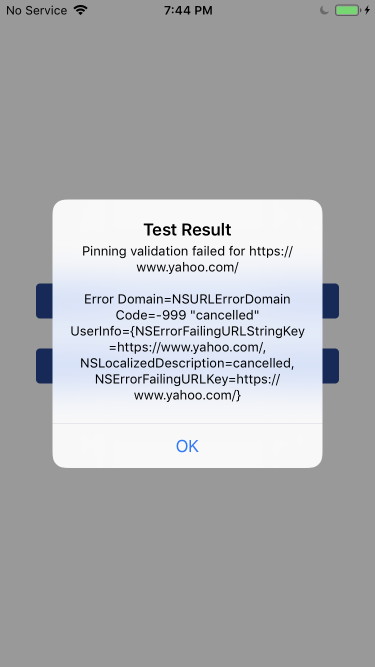 Hence, if I do find a way to bypass pinning, this connection should instead succeed.

Now that we have a plan and a proper test setup (app with pinning, jailbroken device, Xcode, etc.), let’s get to work!

The first thing I tried was to replace the default BoringSSL callback set by the iOS networking stack,boringssl_context_certificate_verify_callback(), with an empty callback that does not check the server’s certificate chain at all:

After implementing this as a MobileSubstrate tweak and injecting it into my test app, something interesting happened: my test app’s NSURLSession delegate method was not called anymore (meaning it was “bypassed”), but the very first connection done by the app would fail with a new/unknown error, “Peer was not authenticated”, as seen in the logs:

And then in the app itself, this first connection would fail with a different error than before: 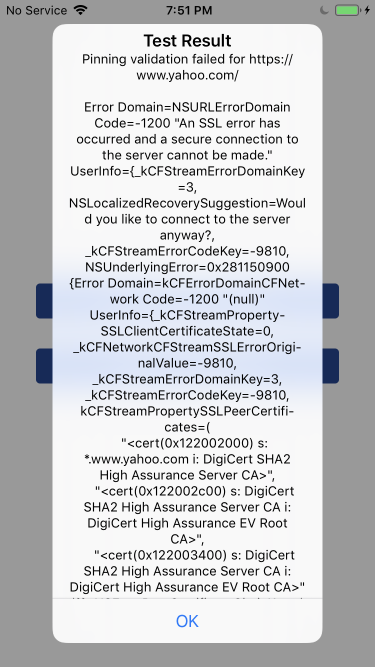 However, subsequent connections to the same server would succeed without triggering the pinning validation callback: 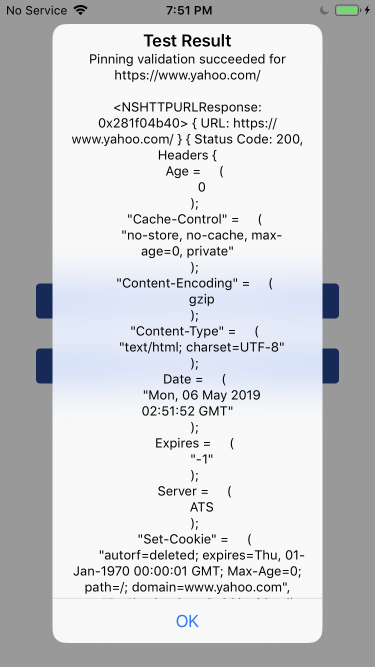 Hence I had bypassed pinning for all connections except for the very first one. Almost there…

I needed more context to understand what the “Peer was not authenticated” error was, so I ended up pulling the shared cache (where all of Apple’s libraries and frameworks are, including BoringSSL) from my iOS 12 device, as described in this guide.

After loading libboringssl.dylib into Hopper, I was able to find the string for the “Peer was not authenticated” error (labelled as “1” in the screenshot), in a function called boringssl_session_finish_handshake(): 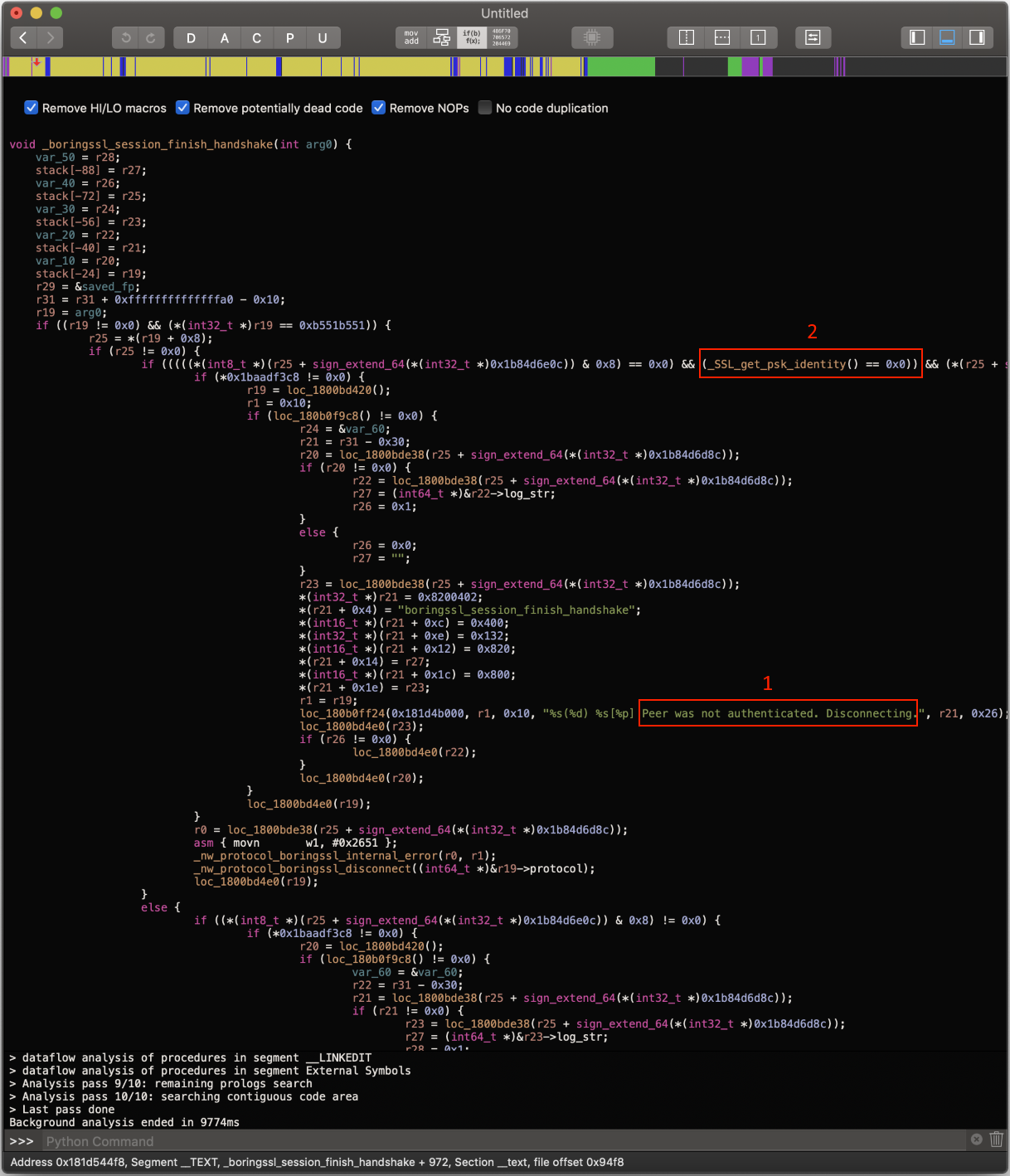 I tried to understand what this function was doing to get a better understanding of the error itself, but since I barely understand arm64 (or any) assembly, I couldn’t figure it out. I tried a few other approaches (such as patching the boringssl_context_certificate_verify_callback() itself) but didn’t find anything that worked.

As I was running out of week-end time I can allow myself to spend on this, I went for a more desperate approach. If you look again at the decompiled boringssl_session_finish_handshake() function, you can see two “main” code paths, conditionally triggered by an if/else statement, with the “Peer was not authenticated” error happening in the “if” code path but not in the “else” path.

A naive attempt would be to prevent the code path with this error from ever being run, ie. the “if” path. As seen in the screenshot, one condition that does trigger the “if” branch is (_SSL_get_psk_identity() == 0x0) (labelled as “2” in the screenshot). What if we patched this function to not return 0, in order to force the execution of the “else” code path (which doesn’t trigger the “Peer was not authenticated” error)?

After injecting this runtime patch into my test app, it worked! Even the first connection succeeded, and my app’s validation callback was never triggered. I had bypassed my app’s SSL pinning validation code by patching BoringSSL.

This is obviously not a very clean runtime patch, and while everything seems to work fine after applying it (which is surprising), it triggers errors that can be seen in the logs whenever the app opens a connection:

The patch has other problems too:

Lastly, there are a few extra things I didn’t have time to do:

That’s all! Head to the project’s repo to see the code and download the tweak.