This year and for the first time, I actually went to the Apple WWDC conference, in San Jose. The conference was quite interesting, and gave me the opportunity to meet some of the members of the Apple security team.

Here are some notes about the security and privacy changes brought by iOS 12 that I thought were interesting.

Starting with iOS 11, developers can “label” the username and password field in their app’s login screen:

This allows iOS to automatically login the user with the credentials they previously saved in their iCloud account, if the app has been properly associated with its web domains.

With iOS 12, a strong password can automatically be generated and stored when creating a new account in an app or in Safari. This functionality can be enabled by using the .username and the iOS 12 .newPassword content types in your “Create Account” screen:

iOS 12 will then prompt the user to automatically generate a strong password during the account creation flow.

Any password that was automatically generated will contain upper-case, digits, hyphen, and lower-case characters. If your backend has limitations in the characters it allows in passwords, you can define a custom password rule in your app via the UITextInputPasswordRules API:

Apple has also released an online tool to help with writing password rules.

Similar labels can be used in a web page that Safari can leverage: 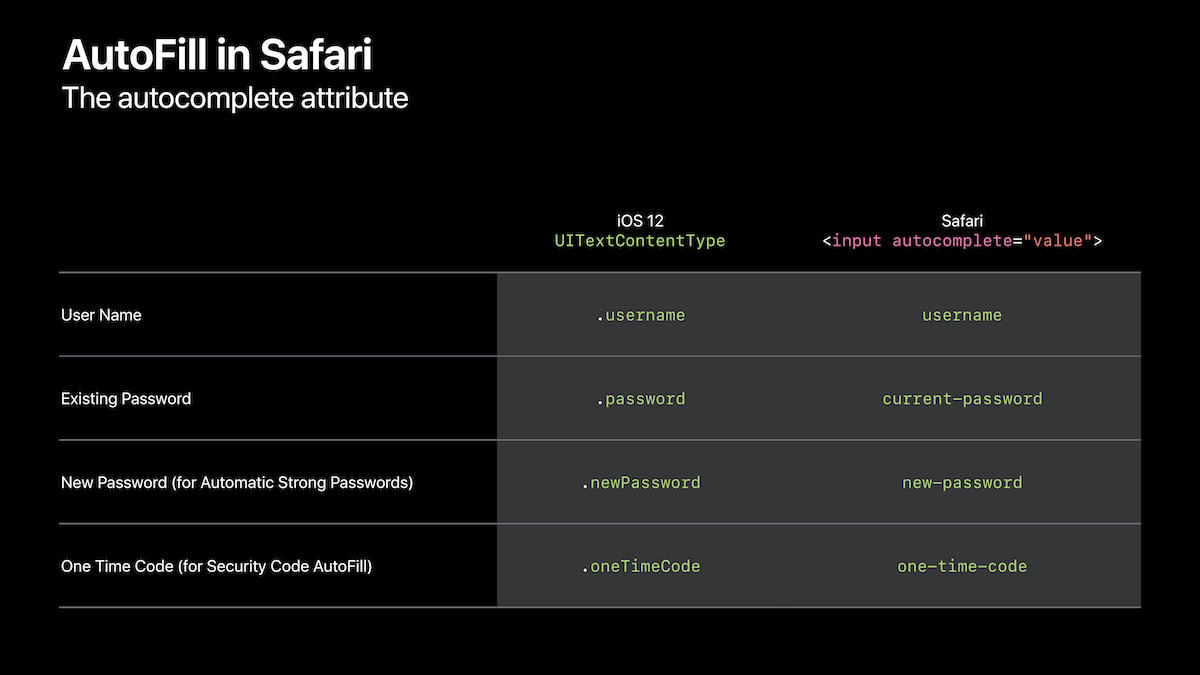 iOS 12 also introduces a content type for the text field that will receive 2 factor authentication codes received via SMS:

Enabling this content type allows iOS to automatically fill in a 2FA code previously received via SMS (with a user prompt), which is pretty cool: 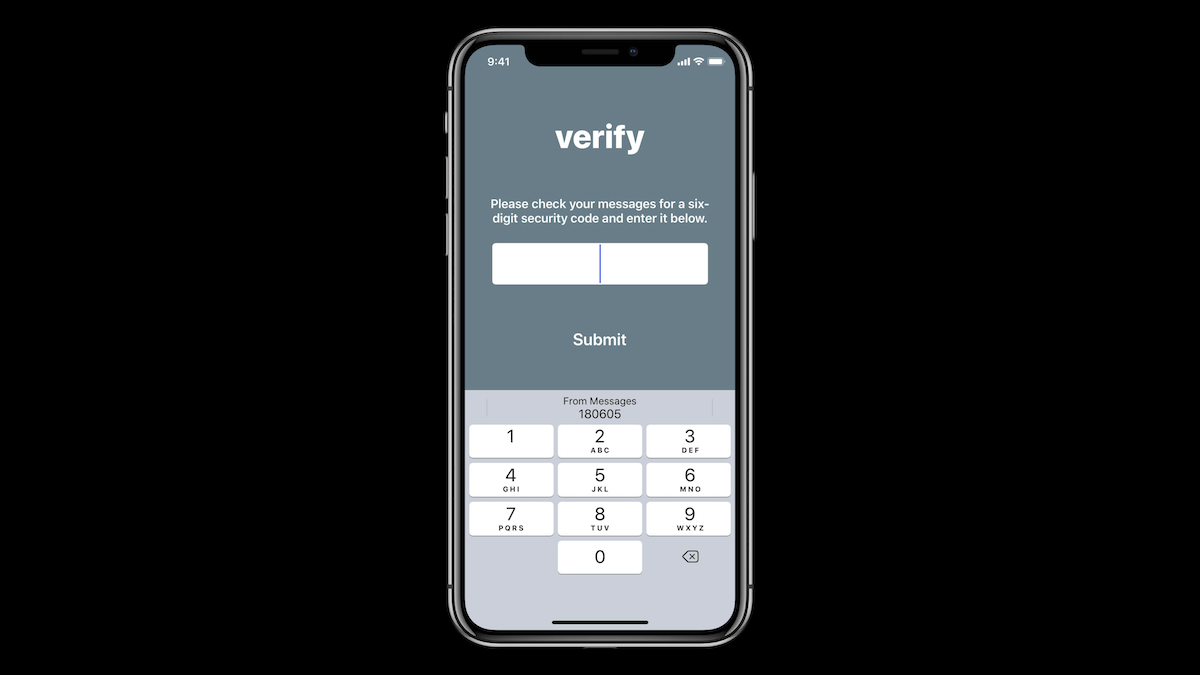 Given an OAuth URL (ie. where to start the authentication flow), the API will: 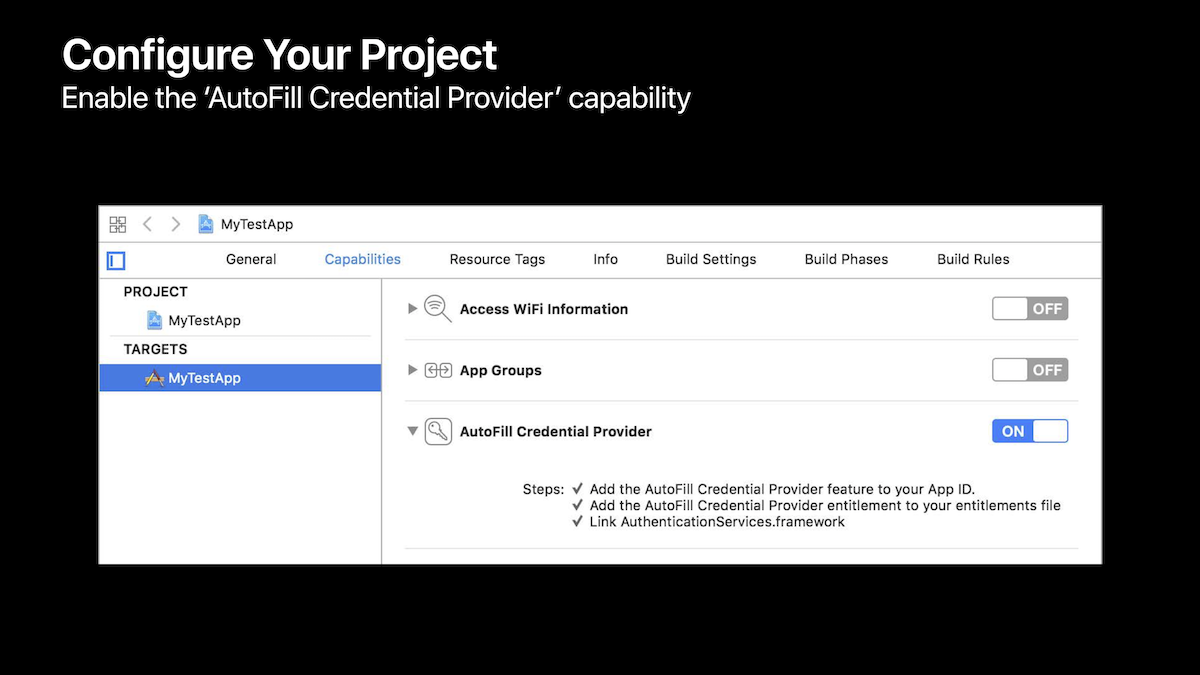 This extension point and the corresponding APIs are all part of the new AuthenticationServices framework available on iOS 12. This framework allows providing a UI for user to choose their password when authenticating into an app, storing a newly-created password, etc.

The framework is described in details in the “Implementing AutoFill Credential Provider Extensions” presentation.

At WWDC this year, a whole presentation was dedicated to secure object serialization and de-serialization: “Data You Can Trust”.

When an application has some logic to receive arbitrary data (for example over the Internet) and to then de-serialize the data into an object, care must be taken when implementing this logic. Specifically, if the raw data can choose any arbitrary class as the the object it gets de-serialized to, this can lead to remote code execution. This type of vulnerability affects almost every language and framework, for example Apache and Java, Ruby on Rails, or Python’s pickle module.

This approach is vulnerable to the issue described above, referred to as an “object substitution attack” in the Apple documentation: the data gets de-serialized to a different object than what was expected by the developer.

To prevent such attacks, the following APIs were introduced in iOS 6:

The “Data You Can Trust” presentation this year heavily emphasized NSSecureCoding and -decodeObjectOfClass:forKey:: 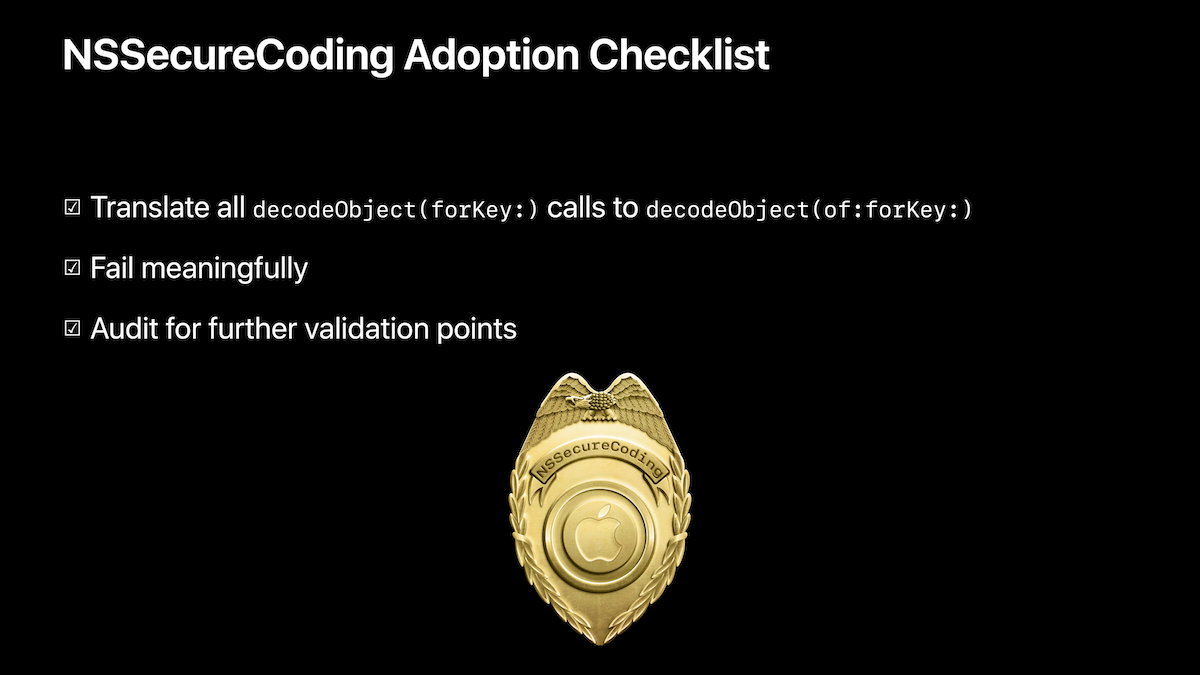 The Network framework, introduced somewhere around iOS 9 or 10 has become a public API on iOS 12.

“Use this framework when you need direct access to protocols like TLS, TCP, and UDP for your custom application protocols. Continue to use NSURLSession, which is built upon this framework, for loading HTTP- and URL-based resources.” 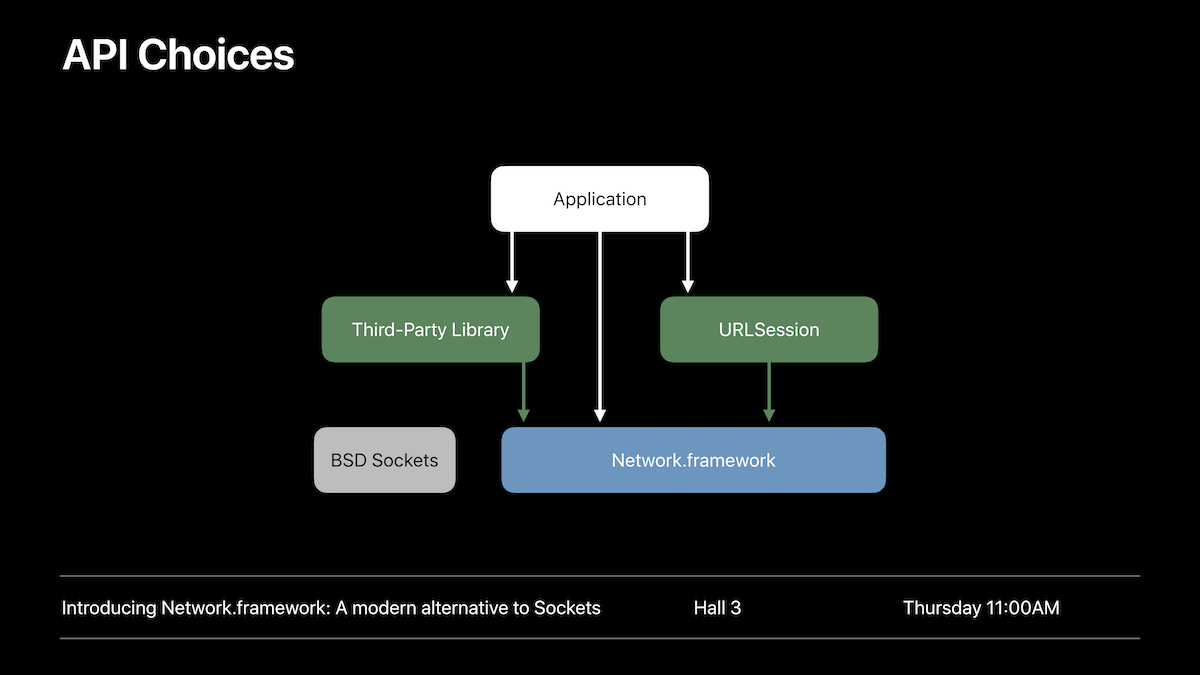 More details about the Network framework are available in the “Introducing Network.framework: A modern alternative to Sockets” presentation.

Developers should expect the legacy network APIs (SecureTransport, etc.) to eventually get deprecated by Apple. Right now and as mentioned in the presentation, they are “discouraged APIs”.

Lastly, App Transport Security is not enabled for connections using the Network framework, but will be “soon” according to Apple engineers.

Starting with iOS 12, the UIWebView API is now officially deprecated. Developers that need web view functionality in their application should switch to the WKWebView API, which is a massive improvement over UIWebView in every aspect (security, performance, ease of use, etc.).

Previously, generating random numbers in Swift was done by importing C functions that are insecure in most cases (such as arc4random()).

The CT enforcement will be deployed “with a software update later this year”.

With iOS 9, Apple introduced App Transport Security (ATS), a security feature which by default requires all of an app’s connections to be encrypted using SSL/TLS. When ATS was first announced, it was going to be mandatory for any app going through the App Store Review process, starting on January 1st 2017. Apple later cancelled the deadline, and no further announcements about requiring ATS have been made.

However, at WWDC this year, I learned that Apple has started reaching out to specific apps through the App Store review process, in order to ask for justifications and/or require the applications’ ATS policy to be stricter, especially having NSAllowsArbitraryLoads (the exemption that fully disables ATS) set to NO. 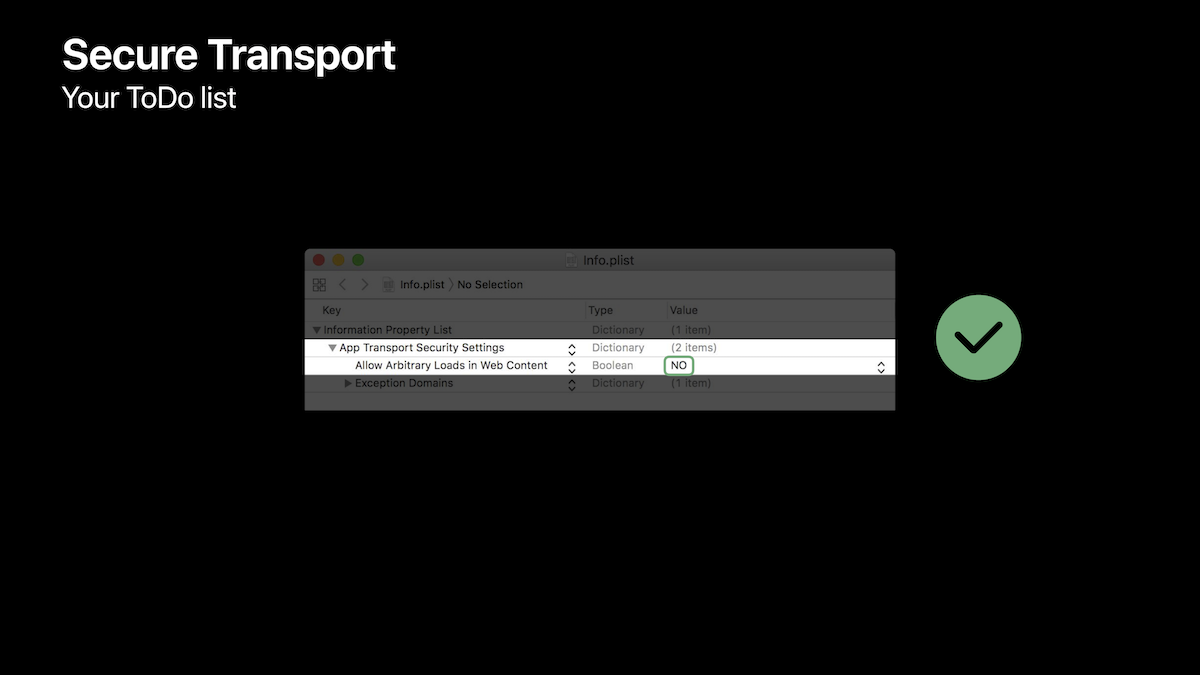 So what should I do?

If you are a developer, here is a summary of the changes to implement in your application, based on all the iOS 12 features described in this article.