After the release of the latest iOS 10 jailbreak, I started getting reports that SSL Kill Switch, my iOS tool to disable SSL pinning in Apps, was not working at all on this version of iOS.

This was very surprising since the tool directly patches the OS’ low-level TLS stack (called SecureTransport) which is used by all the higher-level network APIs on iOS/macOS (CFNetwork, NSURLSession, etc.) to setup a TLS/HTTPS connection with a server. The functions SSL Kill Switch patches are part of SecureTransport’s public API and therefore do not really change across iOS versions, making it unlikely that the tool would just stop working on a new release of iOS.

After doing some investigation, I discovered that the network stack on iOS 10 has changed significantly compared to iOS 9, and I will describe in this post what has changed, why it affected SSL Kill Switch, and how I fixed it.

If you’re looking for the latest SSL Kill Switch binary compatible with iOS 10, go to the Releases tab of the project’s page.

To try to understand why SSL Kill Switch stopped working on iOS 10, I used Xcode and a simple App that opens an HTTPS connection using the NSURLSession API and implements SSL pinning (specifically, the TrustKit Demo App). And as reported, SSL Kill Switch was not able to disable TLS validation when running the App on iOS 10 and trying to use the Burp proxy to intercept the HTTPS connection.

I now needed to figure out what had changed in iOS 10’s network stack, and started by grabbing the dyld shared cache from my iOS 10 device (it’s in /System/Library/Caches/com.apple.dyld/dyld_shared_cache_armv7s) and opening it in this awesome disassembler called Hopper. Looking at the CFNetwork framework, I started checking TLS methods and symbols, to find the lowest-level TLS function that would be called during a TLS handshake: 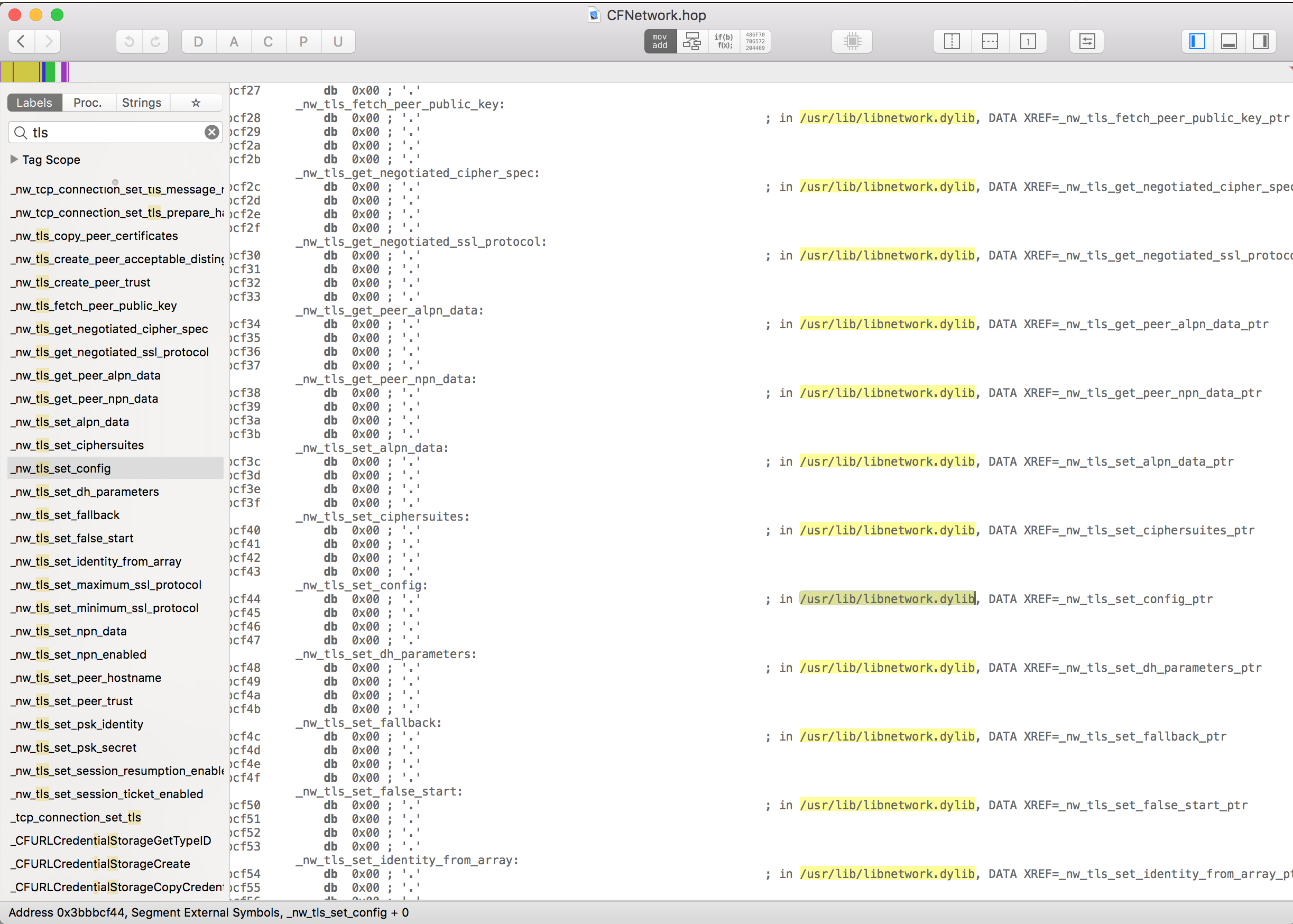 Jumping around in various system frameworks and libraries, I eventually settled for the tls_handshake_set_callbacks function in libsystem_coretls.dylib. This function is used to setup callbacks for specific events happening during the TLS handshake; one thing that helped throughout the process is that libsystem_coretls.dylib used to be open-source (athough the iOS implementation might be different).

To try to understand the differences between the iOS 9 and iOS 10 network stacks, I then set a breakpoint on this function in Xcode, in order to be able to look at the stack trace, so I could see the execution flow from the high level NSURLSession network call initiated by my test App, all the way down to this low-level TLS function.

This would allow me to understand how the network stack differs on different versions of iOS.

When the breakpoint is hit, Xcode displays the following stack trace on iOS 9 and 8:

The stack trace looks like this, from top to bottom:

On iOS 10, the stack trace for the same breakpoint looks quite different: 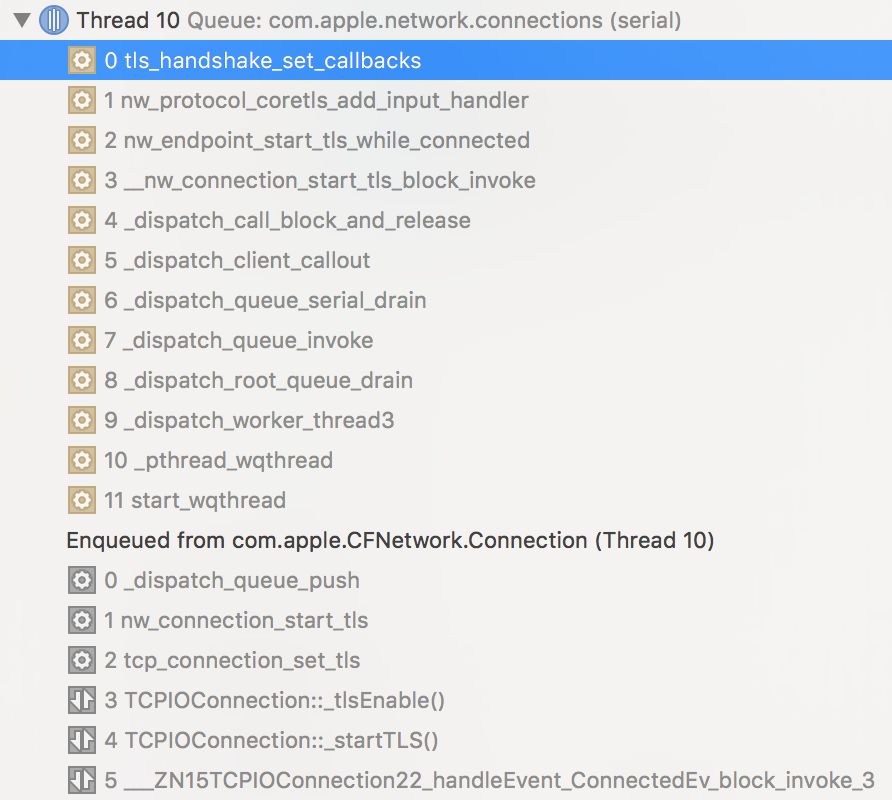 More specifically, from top to bottom:

Apple has significantly changed the network stack on iOS 10:

Without access to the source code, it is hard to tell how big of a change this is: is it some kind of refactoring / cleaning up that mainly affects the libraries’ interfaces and flows, or are the implementations also very different?

Also, libnetwork.dylib already existed on iOS 9, but did not have a lot of the functions that are used in iOS 10 for network connections (they are called nw_xxx). For instance, when trying to set a breakpoint for nw_protocol_coretls_add_input_handler on iOS 9, we can see that the function does not exist:

Because SecureTransport is no longer used by higher level APIs (such as CFNetwork or NSURLSession) on iOS 10, patching SecureTransport functions like SSL Kill Switch does has no effect on an App’s TLS connections. This expains why the tool completely stopped working.

I wonder if these changes mean that Apple will eventually deprecate SecureTransport and expose the iOS 10 network/TLS stack as a public API?

Now armed with a better understanding of the iOS 10 network stack, I started investigating how TLS validation was done in TCPIOConnectionand libnetwork.dylib, in order to find a way to disable the system’s default TLS validation and any code that customizes it (which is how SSL pinning is done).

When I did it for SecureTransport a few years ago for the previous versions of SSL Kill Switch, the customization mechanism for TLS validation was well-documented as SecureTransport is a public API, and therefore easy to understand.

However, TCPIOConnection, libnetwork.dylib and libsystem_coretls.dylib are all undocumented, private APIs, making this process a lot more time-consuming. Luckily, while playing around with some of the TLS functions in these libraries, I quickly stumbled upon an unexpected solution.

The tls_helper_create_peer_trust in libcoretls_cfhelpers.dylib seemed interesting, as it is used to retrieve the server’s SecTrustRef during the TLS handshake. In the Cocoa world, a SecTrustRef is an object that represents the server’s certificate chain and the policy to use to validate it; it is the main object to use when doing TLS validation. The open-source implementation of the function also made it a lot easier to confirm how it works and what it does:

The tls_helper_create_peer_trust function generates the server’s SecTrustRef from a tls_handshake_t object (which represents an ongoing TLS handshake) and puts it in the supplied trustRef argument. The trustRef object can then be used by the caller to do TLS validation and verify the server’s identity.

As a random experimentation, I patched this function (using Cydia Substrate) to make it not do anything:

With the patch applied, the trustRef does not contain anything at the end of the call to tls_helper_create_peer_trust.

I was expecting this change to completely crash the App during the TLS handshake, as whatever code that is doing the TLS validation (probably inside CFNetwork) would get a NULL trust object as the server’s identity (which can never happen), and wouldn’t be able to process further. However, instead of crashing, it completely disabled all TLS validation and pinning, which is exactly what I was trying to do!

It is still unclear to me why this actually works; it seems like the validation logic or callback somehow is ignored when the server’s SecTrustRef is NULL. This is obviously not a vulnerability, as I am injecting code in the App to trigger this behavior, but it is a bit surprising to me. If I ever have the time, I will dig further into this to try to understand what’s going on.

In the meantime enjoy the iOS 10 release!