TL;DR: By default, MobileSubstrate tweaks do not get injected into system daemons on iOS which explains why my SSL Kill Switch tool wasn’t able to disable SSL certificate validation in the iTunes App Store.

While the tool worked well on most applications including SSL-pinning apps such as Twitter or Square, users reported that it didn’t work the iTunes App Store, which would still refuse to connect to an intercepting proxy impersonating the iTunes servers. Other similar tools such as Intrepidus Group’s trustme also seemed to have the same limitation.

A quick look at the App Store on iOS

The first step was to get the right setup:

After starting the App Store app, I noticed that I could already intercept and decrypt specific SSL connections initiated by the App Store: all the HTTP requests to query iTunes for available apps (as part of the App Store’s tabs such as Featured'',Top Charts’’, etc.) as well as app descriptions (Details'', Reviews’’).

However, more sensitive operations including user login or app installation and purchase would fail by rejecting my intercepting proxy’s invalid SSL certificate. From looking at logs on the device, it turns out that two distinct processes are behind the App Store’s functionality:

After figuring this out, getting itunesstored to stop validating SSL certificates was very straightforward. First of all, make sure you’re using the latest version of the SSL Kill Switch (at least v0.5). Then, all you need to do is kill the itunesstored process:

When doing so, launchd will automatically restart itunesstored. This time however, MobileLoader will inject the SSL Kill Switch’s code into the process. You can validate this by looking at the device’s logs, for example using the xCode console. You should see something like this:

If you restart the App Store app, you should then be able to proxy all the traffic and see app store transactions such as logins or app downloads. 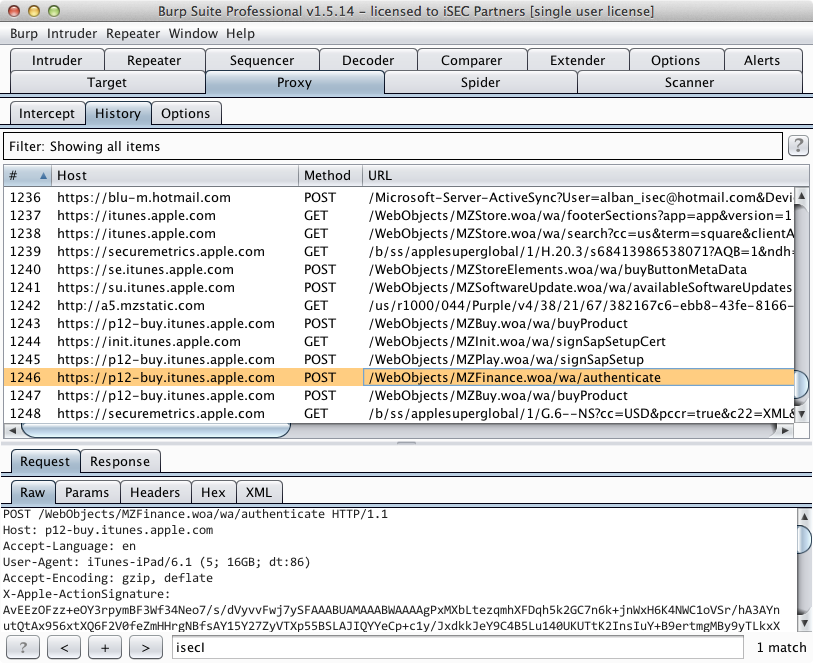 If you try to install an app while proxying, your proxy might crash or freeze when the App Store tries to download the app because IPA files can be fairly large (200+ MB).

A similar methodology could be used to proxy other system daemons including for example accountsd, which is responsible for the Twitter and Facebook integration that was added to iOS 5 and iOS 6.

While working on this, I also discovered a better way to disable SSL certificate validation and certificate pinning in iOS apps. Hence, SSL Kill Switch v0.5 is actually a complete rewrite. If you’re interested in knowing how it works, I wrote a blog post explaining what the tool does.